Some of Turia's Special Friends 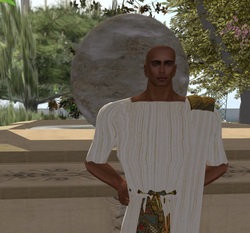 Sir Guile- one of Turia's oldest friends.  17 years ago we became friends in real life and on line.  He lives in the plains of Turia and you can find him in the city.

Here is his story- Sir Guile of Port Kar is of the merchant cast, and is "into" cartography and slavetography. Or slaveology.  Or studying the layout of slaves.  Or the study of laid out slaves.  Which ever way, he's muchly no one to be considered worth trifling with, due to his totes mad trifling skills.  Cus he's a merchant that's got those, uh, trifling skills.

Being from Port Kar, he will kill, and I MEAN HE WILL KILL ANYONE...from Tyros, Cos, or Ar's Station upon sight.  Or at least haggle them about prices to near death, due to frustration.  Make that 'at most haggle with them.'  To near death.  Actually, all he's killed is a potted Fern of Lydius plant by touching it "Just this one time...you know you want me to."  Coincidentally, his favorite phrase seems to be "It's not my fault!"

YET it was HE who first taught Strummer of Koroba how to use a slave whip, AND it was also HE who muchly devised a plan to get rich off the highly vaunted (and DOCUMENTED in the scrolls, dammit) red salt from the far-eastern reaches of the Tahari, in the near-western dune country around Kasra.  Do this, thought he, and golden tarsk bits would (not could) naught but rain upon his parade forever thereafter!
21533f
His intent was to follow a little known and uncharted waterway heading east from the westernmost Jungles of Schendi through the swamplands to join up with the Subequatorial Carthus, then further proceed upon that river until it forked into the two Fayeen rivers at Kasra, and there to the red salt basins north of the Oasis of Nine Wells.  And even muchly more norther of the Oasis of Battle Red Rocks.  Too.  But...He didn't do that.

Instead, he wound up getting roofied by a comely, red-headed, high-chested Panther Girl (outside of the Westernmost Jungles of Schendi, in a bar) then was forced to use her for his pleasure in a most too muchly fashion.  Then, he indiscriminately boarded the wrong ship, got utterly sleen-tanked on kalana (top shelf stuff tho - woots!), was tossed out for drunk at Kargash, and wound up wandering around the Plains of Turia without being seen for months at a time 'lo these many, many years.  This absolutely and positively thoroughly explains his penchant for maps*, which seemingly borders upon fetish.

He's now about as dry as the Tahari and twice as crusty, but say Tal anyhow.


*Author aside:  This is an obvious plug for his map store in Turia.  That Sir Guile Himself allegedly writ this here would have nothing to do with that, there.