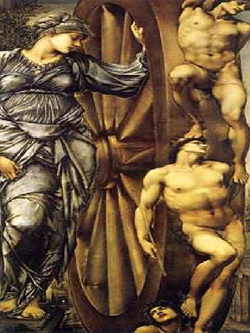 
Those who jeered me or sported with their straps and stones would have little reason for not thinking me slave. I was barefooted; my only garment was a short woolen, sleeveless tunic; on both the back and the front of this tunic was sewn a large block letter, the initial letter of the Gorean expression “Kajirus,” which means a male slave.
Nomads of Gor, page 30

“She is a match for any man,” said Alyena. Her eyes shone with pride.
I turned to the slave master. “Fetch a male slave,” I said.
One was brought. He was not a large fellow. He was, however, an inch or so taller than the female slave.
“You certify me,” said I to the slave master, “that this man is neither clumsy nor stupid, nor drunk, nor an instructor in combat intent upon increasing the confidence of his pupils.”
“It is so certified,” he smiled. “He is used in cleaning the pens. He is a drover who falsified the quality-markings on spice crates.”
I placed a copper tarn disk on the desk of the slave master.
“Fight,” I said to the slaves.
“Fight,” said the slave master.
The man looked puzzled. With a cry of rage, shrill and vicious, the female slave leapt toward him, slashing his across the face with the quirt. She struck him twice before he, angry, took the quirt from her and threw it aside.
“Do not anger me,” her told her.
He turned and caught her kick on his left thigh. She leapt at him, fingers like claws, to tear out his eyes. He seized her wrists. He turned her about. She could not move. Then, with considerable force, as she cried out with misery, he flung her, the length of her body, belly front, against the stone wall.
He then stepped back, jerked her ankles from under her and flung her to the stones, and knelt across her back. She wept and struck the stones with her fists. Then her halter was removed and her hands pulled behind her and bound with it. He discarded her belt and the strips of leather. He removed her sandals. With one of the long, straplike laces, he crossed and bound her ankles. Then, angrily, he turned her collar, hurting her, with its ring, to the back.
With the other straplike lace, run through the ring and tied the binding on her ankles, her jerked her ankles up, high, fastening them there. The he crouched over her and she lay bound at his feet. He turned her head, looking over her right shoulder, so that it faced him; he crouched so that she could not move; his right ankle was against her left cheek. He poised his thumbs, held downward, over her eyes.
“I am a woman at your mercy,” she wept. “Please, Master, do not hurt me!”
He looked to the slave master. The slave master came to where the woman lay. He looked down at her. He called two slaves from behind the silver curtain. They looked down at the woman. Then the slave master said, “Put her in slave silk, and give her to male slaves.”
She was freed of the cord binding her ankles to her collar ring.
She was jerked to her feet and held there; she could not stand by herself for her feet were still crossed and bound. “Who are the masters?” asked the slave master of her.
The woman, hair before her face, held upright by men, looked to Alyena. The woman trembled. “Men,” she whispered. “Men are the masters.”
Alyena’s face turned white.
{Tribesman of Gor - 82}

I ran to the merchant and knelt before him. I pointed to the male slave. “He looked upon me!” I cried.
“Have you permission to speak?” He asked.
“May a girl speak?” I asked, frightened.
“Yes,” he said.
I pointed again to the male slave  “He dared to look upon me,” I said.
“You are too good for him?” asked the merchant.
“Yes,” I said. I then realized this was not the proper thing to say. But I had said it.
“You are both animals,” he said.
“Yes Master,” I said.
“But you are a female,” he said.
“Yes Master,” I said.
“And he,” he said, “though slave is yet male.”
“Yes Master,” I whispered.
“And is not the male animal the master of the female animal?” he asked.
“Yes Master,” I said.  I knew that male dominance was pervasive among mammals, and that it was universal among primates. It can be frustrated only by an extensive and complex conditioning program, one adequate, over a period of years, to distort the order of nature.
“Do you find this slave of interest?” asked the master of the male slave.
He shrugged. “She is small,” he said.
I looked at him, frightened.
“But she is not without interest,” he conceded.
“Do you think you can catch her?” asked the master.
“Of course,” said the male slave.
I rose to my feet frightened.  I began to back away.
“She is yours,” said the master.
{Slave Girl of Gor - 345}


There is no distinctive garment for a male slave on Gor, since, as it is said, it is not well for them to discover how numerous they are.
{Outlaw of Gor - 66}

Male slaves, on Gor, are not particularly valuable, and do not command high prices. Most labor is performed by free men. Most commonly, male slaves are utilized on the cargo galleys, and in the mines, and on the great farms. They also serve, frequently, as porters at the wharves. Still, perhaps they are fortunate to have their lives, even at such a price. Males captured in war, or in the seizure of cylinders or villages, or in the pillaging of caravans, are commonly slain. The female is the prize commodity in the Gorean slave markets. A high price for a male is a slaver tarsk, but even a plain wench, of low caste, provided she moves well to the touch of the auctioneer's coiled whip, will bring as much or more. An exception to the low prices for males generally is that paid for a certified woman's slave, a handsome male, silken clad, who has been trained to tend a woman's compartments. Some of such bring a price comparable to that brought by a girl, of average loveliness. Prices, of course, tend to fluctuate with given markets and seasons. If there are few such on the market in a given time, their prices will tend to be proportionately higher. Such men tend to be sold in women's auctions, closed to free men, with the exception, of course, of the auctioneer and such personnel.
{Hunters of Gor - 32}

“They are male silk slaves, pleasantly featured, symmetrically proportioned, charming fellows, gentle, sensitive, unthreatening. They are well trained to be a woman’s slave.”
“Ah!” she said, as though interested.
“They are the sort,” he said, “with whom a lady might chat of her day, her doings, and thoughts, with whom she might exchange gossip, and gratefully share delicate confidences.  They are well-trained to be a woman’s slave. They would look well in their silk at your slave ring.  You could be proud of them as they hurry about your errands, keep your quarters and serve your friends.”
“They are not masculine, are they?” she inquired. “I find masculinity so offensive and vulgar.” She said.
“You need have no fear,” he said. “They have been selected for their nature, which is that to be a woman’s slave.”
{Witness of Gor - 132}

"The small, heavy lock on a girls slave collar, incidentally, may be of several varieties, but almost all are cylinder locks, either of the pin or disk variety. In a girls collar lock there would be six pins or six disks, one each, it is said, for each letter of in the Gorean word for female slave, kajira; the male slave, or kajirus, seldom has a locked collar; normally a band of iron is simply hammered about his neck; often he works in chains, usually with other male slaves."

"In some cities, including Ar, an unchained male slave is almost never seen; there are, incidentally, far fewer male slaves than female slaves;"

"The litany and responses of the congregation were now completed and the initiates, some twenty within the rail, began to sing in archaic Gorean. I could make out little of the wording. There was an accompaniment by sistrums. Portions of the hymn were taken up by four delicated boys, standing outside the white on a raised platform. Their heads were shaved and they wore robes resembling those of the initiates. Choirs of such boys often sang in the great temples. They were young male slaves, purchased by initiates, castrated by civil authorities and, in the monasteries, trained in song. I supposed, to one versed in music, their soprano voices were very beautiful. I did not care much for them. Here in the far north, of course, in Kassau, to have any such boys, properly trained in the archaic hymns, indicated some wealth. I did not think such singers existed even in Lydius."

"Slavery also, of course, encompasses the ownership of male slaves, for which there is less precedentdent in nature. Where males are concerned the institution is primarily economic. The labor of male slave is useful and cheap. It is applied in such places as the quarries, the roads, the great farms, in certain types of cargo galleys, on the wharves, at the walls of cities and in the forests. Male slaves are usually debtors or criminals; sometimes they are captives, taken in actions against enemy cities or facilities; sometimes they have merely accrued the displeasure of powerful men or families; some slavers, working in gangs, specialize in the capture of free men for work projects; they obtain a fee per head on a contractual basis."

" 'You seem to have no male slaves,' I observed.
'They are now scarce in Schendi,' he said. 'Bila Huruma, Ubar of Lake Ushindi, uses them for work on his great canal.' "