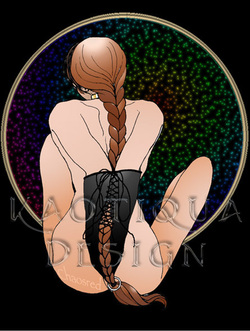 Everyone online knows what an HNG is.  Someone in Turia coined an acronym a while back that perfectly describes what Turia does *not* want in their training program: HWH.  It stands for "Hole With A Heartbeat", a crude way of saying that Turia is not interested in any of the thousands of lonely women who come online everyday to willingly type "Hustler" magazine language into almost any message window that opens.  Why would   Turia want them?  They are literally available at the *snap* of a finger, and, unfortunately, even they believe their only value is their cyber-body.


kijirae who visit Turia are not assailed in message by men offering to "train" them all they need to know, literally begging them to take a "tavern collar".  Many girls go away feeling they are not wanted because no one has reached for their "heat", or whispered to ask about their "belly". The ones who come back are those who read the subtle clues.  Turian slaves are smart, knowledgeable, classy, sexy and beautifully subservient kajirae, whose loyalty to their Masters and Turia is exemplified by how long they have worn their collars..  most of them, for over three years, online and offline.  If this is what interests you, read on:  Turia accepts what are known as "Gate Slaves" on a very limited basis.  Slaves who visit, over time, and continually express an interest in training, who demonstrate basic qualities of intelligence and commitment, who have a reasonably "untainted" history on online Gor, and who can devote a consistent amount of time to serving Turia may qualify.

The rules for such trainee's are found in the Laws Section of this website, describing the various levels of training and the requirements for each.

In return for demonstrating the patience and loyalty and work required to climb through these levels, you will receive what you deserve from those in Turia: the admiration of Gorean Masters who appreciate an accomplished and beautifully submissive kajira, and sisterhood with the finest kajirae to be found in online Gor.


The Turian collar lies loosely on the girl, a round ring; it fits so loosely that, when grasped in a mans fist, the girl can turn within it; the common Gorean collar, on the other hand, is flat, snugly fitting steel band. Both collars lock in the back, behind the girl's neck. The Turian collar is more difficult to engrave, but it, like the flat collar, will bear some legend assuring that the girl, if found, will be promptly returned to her Master.

Training in Turia for Girls Interested in a Gate Collar- Gorean University With Content from Maralyn Demar and other Turians going back to 1996.

New Turian gate slaves start out as white silks with a tu collar and copper Bells ( EX: nick{tu}). The kajirae  in this category will be taught basic positions,  drink service, food service and general protocols as well as basic Gorean and Turian culture. Their knowledge in these areas and demonstration of their loyalty, obedience, and commitment to Turia are the primary prerequisites for advancement to silver bells.  kajirae  are rarely advanced to silver bells in under 4 weeks time.

I) Special Rules for Copper bells are as follows:

a) Copper belled girls may not message anyone but Turian Master/Lady and kindra{R}, Crystal Tu, Melody Tu, Paua Tu, Mia Tu.  Messaging is for training questions/concerns only.  No idle chatter allowed.
b) May only serve Turian Masters/Ladies, unless directed to serve guests by one of them.
c) May not travel to non-Turian cities unless accompanied by a Turian Master/Lady except for Ship of Acquisition or any of the Sardar Sims.
d) May not lap or alcove at all.
e) Attend all training classes, or make arrangements for review classes.  In some instances, the class logs may be provided and the girl will be tested on content.

Once a copper bell kajira can demonstrate all positions, can pleasingly serve all categories of foods and beverages, has a working knowledge of  Gorean/Turian culture and customs, and shows a basic ability to be obedient and loyal to Turia, she is promoted to a silver belled girl. Her nick is then changed to <nick>{Tu}.
Silver belled girls will be taught dancing, and several forms of personal service (ex: massages).       Special Rules for Silver bells are as follows:
a) May message the Free and other kajarae of Turia, but no outsiders of Turia without the permission  of Turian Free Citizens.
b) May travel to approved cities unescorted.
c) Must serve any visitors in channel.
d) May lap with permission of an  Turian Commanders, Guardsmen and Training.
e) Silver belled girls, also must share in the responsibility of overseeing the copper belled girls to ensure their safety and training

Once a silver belled girl has reached a degree of excellence and has shown the highest level of proficiency in the creation of her own serves, dances, and personal service techniques.. and has passed an exam which tests her basic knowledge on these topics as well as a general knowledge of Gorean culture/etiquette/history, and has demonstrated her loyalty and commitment by attendance, and by mentoring new girls, she is awarded her gold bells.
Gold belled girls have their collars changed to TU.
Gold belled girls will be trained in a much deeper Gorean Culture, Turian Culture, and Gorean society and culture. She will be required to read at least the first four John Norman novels.       Special Rules for Gold bells are as follows:
a) May message freely.
b) May travel freely to any Gorean cities with the exception of those on the forbidden list.
c) May lap freely.
d) Accept the responsibility for overseeing and training the silver and copper belled girls.
e) Demonstrate a "role model" quality in their actions and words.
f) Required to assist visiting kajira on Turian protocols.


She wore bells locked on both wrists, and on both ankles, thick cuffs and anklets, each with a double line of bells, fastened by steel and key. She wore the Turian collar, rather than the common slave collar. the Turian collar lies loosely on the girl, a round ring; it fits so loosely that, when grasped in a mans fist, the girl can turn within it; the common Gorean collar, on the other hand, is a flat, snugly fitting steel band. Both collars lock in the back, behind the girl's neck. The Turian collar is more difficult to engrave, but it, like the flat collar, will bear some legend assuring that the girl, if found, will be promptly returned to her master. Bells had also been affixed to her collar. "She is Turian?" I asked "Of course," said Kamchak. "In the cities," I said, "only Pleasure Slaves are so belled, and then usually for the dance." "Her master," said Kamchak, "does not trust her."