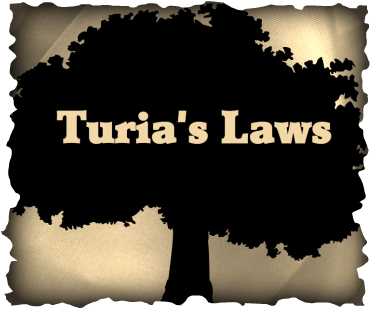 2) This is Gor, please keep the talk as such, using "Gorean Terms" when possible.

3) Turians do not believe in cyberkillings, therefore they are NOT recognized here.

4) Turians believe in consentual slavery.  Trying to force collar someone will result in your being removed from the City and banned.

5) No open performing of sexual acts  in front of others, take it to an alcove.

6) Respect the property of others.  Do not try to force a slave to disobey their Owner.

7) Punishment of a slave not your own is not allowed.  If it is a Turian kajira,  approach a Free Person. If a visiting kajira,  talk to the kajira's Owner.

8) No IM’s without permission.

B) General Rules for kajirae
1) Always kneel upon entering, asking permission to enter, and always ask permission to leave, go or return from afk. When permission is granted to come back from afk, return to where you were before you left, a complete entrance is not required. (Re-greeting is optional but the greeting of people who have entered while you were away is required).

3) kajirae who have 911 may quit  or go afk at any time, but MUST put in chat "RL emergency" before doing so. Be prepared to explain your actions when you return.

4) kajirae who drop off-line, returning within 10 minutes, may kneel and beg "10 ehn rule Master" and may be allowed to reenter informally, if a free person grants it.

5) Visiting kajirae go directly to the serving furs upon entry, or to their Owner if they are present.

6) All Freepersons are to be addressed as Master, Mistress or Lady. If the sex of the Freeperson cannot be determined from the name, Master is to be used until the gender is clarified.  Turians use the honorific Lady to speak to Free Women.

7) kajirae  who have "special" instructions from their Master are advised to inform a Officer of the city of those rules so that he or she may assist you in keeping you obedient to your master, and to ensure that other visitors do not try to make you do something you are forbidden.

8).  Do not display "slaves heat" or any equivalent (for kajirus) in a serve, dance or any post. If you cannot be sensuous without being crass, do not bother to try.

1) Always kneel upon entering, asking permission to enter. Going directly to kneel before the highest ranking Turian (your owner is always the highest ranking person to you), greet him/her and await his/her instructions as to what to do next. (Do not greet or do anything else until that happens).

2) Always ask permission to leave the city/room, and upon obtaining permission to do so, always "back" out of the channel with your head lowered and hands clasped at your breasts (or before you somewhere).

3) Always offer to serve any visitor (unless you are already doing so).

4) On serving, you will remain kneeling  before him until dismissed or called by a higher ranking op. Never take it upon yourself to ask for dismissal, such behavior is not pleasing.

5) kajirae in Turia are not to be greeted by other Turian girls until they have entered properly.

6) The accepted "greeting" for Turians is Tal, kajira, kajirus and free alike.

7) When going to a non-Turian City and asking for permission to enter or exit, you will wait for a Turian to grant such permission if one is present. Upon entering you go and kneel before him/her as you would in a Turian room/city. Should another Freeperson grant you that permission you will post "<Turian slave> smiles in acknowledgement to Master <Nick> and bows her head awaiting Turian permission"

8) The use of the term Mistress is forbidden to Turians.

9) Turia is known for accomplished slaves serving beautifully. To that end, posts used in serving should be kept short and consise. Focus should be on creativity.but readable posts that are well paced.