Merchants Luck and Other Silly Jokes by Turians 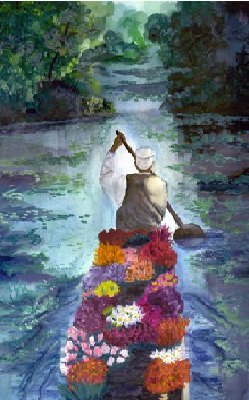 "As the woman approached I suddenly became aware again of Saphrar speaking. "Behold my ward," he was saying, indicating the approaching girl. "The richest woman in all Turia," Kamchak said. "When she reaches her majority," Saphrar remarked. Until then, I gathered, her means were in the doubtless capable hands of Saphrar the merchant. The supposition was later confirmed by Kamchak. Saphrar was not related to the girl, but had been appointed by the Turian merchants, on whom he undoubtedly exercised considerable influence, the guardian of the girl following the death of her father in a Paravaci caravan raid several years before. The father of Aphris of Turia, Tethrar of Turia, had been the richest merchant in this city, itself one of the richest cities of Gor. There had been no surviving male heir and the considerable wealth of Tethrar of Turia was now that of his daughter, Aphris, who would assume control of these remarkable fortunes upon attaining her majority, which event was to occur this spring."
Nomads of Gor pg. 91


COMMAND GESTURES
(tuchuk version)
What's at stake? There once was a warrior from Turia, very strong, and brave, skilled in the manly arts of war, and very well thought of by his peers.  He, though not terribly rich, was reasonably well off, and could afford the best quality of armaments, and he was mounted on a fine kaiila.  One day, while riding, his eye fell upon a luciously brazen slut in a nearby Kasser encampment, and  at the next Love War, he swore that she would leave the field, her throat encased in his collar. This thought did not go over well with the Tuchuks, or rather at least one of them.  He was an older sort, wizened and as tough as old bosk leather, quite the antithesis of the Turian warrior.  He, too, had sworn that this delicious bit delicious hussy would be his as well. Both vowed that they would meet before her stake at the War of Love, and settle this matter once and for all.  However, the Second Hand Passage was a long time off, and in the interm, the grizzled old Tuchuk had to endure  the sight of the Turian Warrior riding about the camp hoping to catch a glimpse of the slave of his desire. When the day finally dawned, the two met in front of the stake where the slave was tied.  The Turian rode up in on his war kaiila, and dismounted, standing tall and proud in the light of the sun.  The old Tuchuk approached, looking as scrofulous as usual,and swilling paga out of a bottle. The Turian began the exchange of "compliments" traditional at moments like this.  He distinguished himself with  his style and eloquence as he cast aspersions up and down the family tree of the tuchuk, beginning with his distant ancestors who had obviously mated with their bosk; to his parents who had not been Free Companions, and down to his as yet unborn heirs.  After making a few comments about his opponent's sexual prowess, or lack thereof, he halted and waited for the Tuchuk to return the favour. The old Tuchuk stood there, and swilled yet more paga, as he readied for battle, grizzled and weathered though he was.  He pulled himself upright, and with a gesture that spoke volumes, he extended his middle finger vertically in the classic gesture known as "flipping the tarn"> He followed it up with the same gesture, only horizontally. The mighty Turian was confused as he stood there by his kaiila, it was one thing to be insulted, and quite another not to understand the insult. And he looked at the old Tuchuk, who stood there swilling his paga.  So the warrior spoke to him.
"Old Man, I know it is your fondest wish to place that quiva between my ribs, and you may yet do so.  But you may not.  But before either of us seek the cities of dust,  I demand to know what is meaning of this second gesture!!" The old warrior leered at him, took a final swig of the paga, draining it and threw the bottle far away. He then  spat, and wiped his mouth with the back of his hand and looked, gimlet eyed, at his enemy and spoke: "Don't like your kaiila, either."

​Two Hunjer whales, a male and a female, are swimming off the coast of Torvaldsland when the male whale looks up and sees the serpent ship that killed his father five years ago.
<larla{TW}> Excited at the opportunity to avenge his father's death, the male whale says to the female, "Let's go underneath the ship and blow air through our blow holes. That ought to knock their boat over and make them think twice about killing innocent whales."
<larla{TW}> The female whale agrees, and the plan works perfectly.
<larla{TW}>      Once the serpent has completely sunk, the male whale notices that most of the sailors are making their way back to the shore by either swimming or in lifeboats.
<larla{TW}> Not willing to let them get away so easily, the male whale yells, "They're going to shore - Let's go gobble them up!"
<larla{TW}> Just then, the female whale becomes less cooperative, "Look," she says, "I agreed to the blow job, but there is NO WAY I'm swallowing the seamen."
<TuriaGd> Speech Violation noted for larla{TW}!
<Rsvp-> HAHAHAHA
<larla{TW}> thank you for your correction, Master TuriaGd  8)
<kindra{R}> ohhhhhhhhhhhhhhhhhhhhhh

​larla{TW}> One from the Caste of Builders leaves his girls to put the roof on a building, the future home of the City's Second Commander.   As they are working, one blonde slave keeps throwing every few nails away.
<larla{TW}> The other blonde slave looks at her and says, "Why are you throwing those away?"
<larla{TW}> The first blonde pulls out a nail that has the point facing out and says," See?...its defective!"
<larla{TW}> The second girl scoffs and says, "Silly girl!...those are for the other side of the roof!"

​ Anyway, seems there was an older FW who went to visit her daughter
<Rsvp-> she went into the tower where her daughter and her FC lived and walked into their quarters
<Rsvp-> Upon entering she heard her daughter and proceeded to the sleeping chambers
<Rsvp-> When she walked in, she saw her daughter naked on the sleeping furs
<Rsvp-> Scandalized, she cried out  "Daughter, what are you doing?"
<Rsvp-> The daughter said that she was waiting to greet her companion
<Rsvp-> "B b but you are naked" said the mother
<Rsvp-> The younger woman smiled and said, "This is the dress of love, and it is how I want to surprise my companion"
<Rsvp-> The woman saw the love in her daughter's eyes and thought how beautiful the sentiment was
<Rsvp-> She kissed her daughter and hurried to her own home
<Rsvp-> when her Companion entered he called out her name
*** TuriaGd changes topic to "Best Gorean Website ever, newly revamped...www.turia.com"
<Rsvp-> "In here" she cried
<Rsvp-> WHen he entered, her companion say her stretched out nude on the sleeping furs
<Rsvp-> What are you doing? he asked
<Rsvp-> smiling she said "I greet you in the dress of love"
<Rsvp-> Looking at her he said
<Rsvp-> "Well you better have it ironed, cuz its all wrinkled"
<larla{TW}> hehehehehe
* Kroner laughs
<kindra{R}> hahahah
<kindra{R}> ohh Master
* kindra{R} giggles
<Rsvp-> Umm larla
<Rsvp-> better file that one in the do not tell in front of FW file
googlea5433e7b9cb2e77d.html